The Waterloo Bell: Homage to Kepler 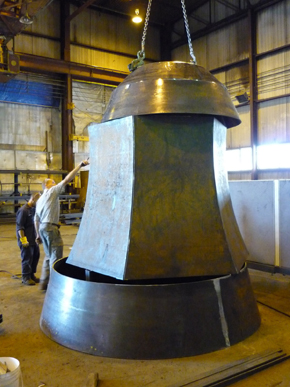 The bell, installed at the Civic Square in downtown Waterloo, ON is a tribute to the industrial history of Waterloo Region, its founders and its work ethic.

The completed bell reflects the craftsmanship of the people at Double R Steel. After 30 days of cutting, rolling, fitting and welding, even the artist was impressed.

(exerpt from from City of Waterloo...) 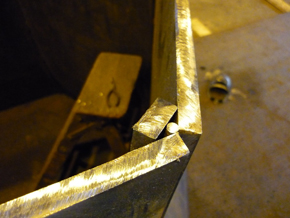 The Waterloo Bell is the artist's tribute to: 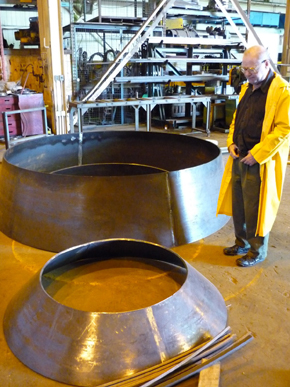 The Waterloo Bell is asymmetrical. Like humans or communities in motion, the top (head), middle (body), bottom (legs) of the Bell are slightly out of balance as they accommodate something new and try to find a new balance and movement forward.

Humans have used bells to gather civic or faith communities to celebrate, inform and debate, or for sounding alarm, all of them involving movement and personal and social re-balancing.

The Waterloo Bell is manufactured of corten steel and the parts refer to the shapes of barrel staves and hoops. Clearly barrels are domestic, agricultural, industrial, and commercial Waterloo artefacts. It not only references the physical importance of barrels to Waterloo but also draws on and recognises the essential historical role that barrels played in realising that faith and analysis could and should co-exist.

Double R does our yokes and nobody else can do them and they do a very good job of it.
Donna Michaud, Viking Cives Ltd., Mount Forest, ON

You have an excellent staff at Double R. We like dealing with you and have recommended you to others who need top quality rolling done.
Helmie Van der Most, Vancor Supply, Welland, ON

“In order of importance its Quality, Delivery and Price. Just behind that – if something is wrong – how quickly can we get a replacement part? Yes, we have a plate supplier nearby who does roll small bands for us, however, it’s a struggle to get them round on the bigger bands – Double R Steel does it right and if there is a problem they fix it fast.”
Sault Ste. Marie, ON

Pretty much everything they have done for us, they've done very well. There are very few companies that Cantec is comfortable with subcontracting work to and Double R is certainly one of them.
Ed Jordan, Cantec Manufacturing, Cambridge, ON

We had been using another supplier for our rolling, but when we needed improved turn around time, they couldn't deliver, so we looked around and settled on Double R after exploring a few others. I think their quality is pretty good and more importantly, it's ready on time.
David Hartig, Precision Products, Guelph, ON